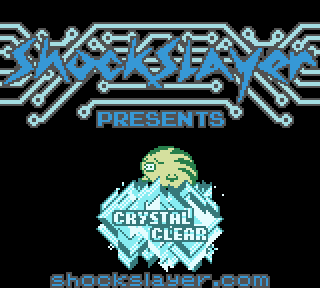 Ah, yes! The ROM hack. It's territory I've explored before on this very blog, and ironically also in the territory of Pokémon several years ago for my Halloween special! The Pride of Kanto is never coming home!

But when I last went into the realm of that particular franchise, there was something I said...what was it?

The second reason is because of a ROM hack that I'm going to be taking a look at at some point in the future, one that I've taken quite a bit of enjoyment from after having it recommended to me via e-mail. More on that later.

Ah, well...later has indeed come! It's time to discuss one of the most intricately crafted ROM hacks I have ever come across - Shockslayer's very own Pokémon Crystal Clear.

I'm not gonna dance around the issue here - it's a really good one!


So, it's once more your task to be the best like no one ever was. Except this time is a little bit different in where you start, what you start with, how you look, and how you approach becoming the best like no one ever was. Pokémon tends to be a very linear franchise. You start in a town, get your starter from the local professor, and go around collecting other Mons, training them up, beating the snot out of other kids for their spare pocket change until you can eventually take on the local gym leader and then travel off to do it again and again.

Pretty much every game in the main franchise (yes, even Sun and Moon) has the same if not a very, very similar set up, with most areas that you're not supposed to be in blocked off until you complete a certain set of tasks or you've reached a certain level. Crystal Clear seems to have been designed to create the ultimate open world experience, which sounds completely insane on paper but really, really works in practice. You can take on the Gyms in any order and both the Gyms and the trainers in the world will have their teams adjusted depending on how many badges you've obtained. This actually adds something to the game that really hasn't existed before: strategy.

That's not a joke. What order will you take the gyms in? Will you got to take on the later Johto Gyms or the earlier Kanto gyms first? Or some combination there of? Of course, going out of order also means that later gyms will be more difficult if you do them out of order...and some of the formerly lower-level gym leaders have some pretty nasty surprises hanging out on their team at higher levels....

Other than that, the game plays very much like Crystal version. There are several things that are considered beyond the bounds of the canon game, but you're told fairly early on that these things are not required to completely the game. They're merely in for flavor. That being said, having been playing through it, I find that it's quite rewarding to find those little things. While most of these are little nods to people Shockslayer knows or are references to other things, it's clear that there is just as much love for the Pokémon franchise here as well.

Also...it is actually possible to catch all 251 that were available in the Second Generation.

Insane, right? But they pulled it off and I honestly couldn't be happier about it. A feat that was heretofore impossible with only a single game and it has been completed here, but Crystal Clear. Gotta catch 'em all? Now, you can!

Really, I can't say too much more about this game. If you're a fan of the franchise, I definitely say you should check it out. It's definitely worth the time and effort.

Pokémon Crystal Clear is brought to us by Shockslayer for the PC. Google is your friend!